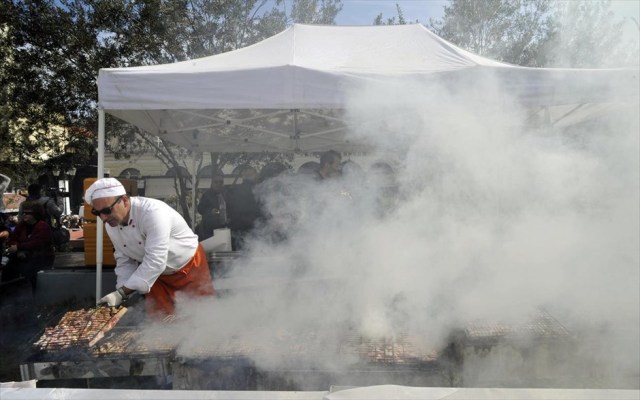 Tsiknopempti is the Thursday during Carnival or the “Greek Mardi Gras” period which marks the begining of the last weekend that observant Greek Orthodox Church members can “legally” eat meat. Because of this, everyone rushes to prepare and enjoy their favorite meat dishes, creating a cloud of smoke where it is being cooked. This gives Tsiknopempti one of its other common names, “Smoke Thursday” or “Smoked Thursday”. It is also called “Barbecue Thursday” or “Grilled Thursday” by some. It’s a popular day for going out to eat and enjoying as many different meats as possible. It can also be called, as a joke, “Feast of the Carnivores”.

In English, Mardi Gras means “Fat Tuesday” and so Tsiknopempti is sometimes also called “Fat Thursday” – which is logical as the cooking of all that meat results in vast quantities of fat dribbling down onto the coals.

In Greek letters, Tsiknopempti is Τσικνοπέμπτι. In Greek, Thursday is Pempti (Πέμπτη), meaning the fifth day of the week as Greeks count Sunday as the first day.  The word tsikna (Τσικνο) refers to the smell of cooked meat – however, “Smelly Thursday” has not caught on as a translation.

Meat is king, with the emphasis on grilled meats, though the occasional stew pot will be visible. Here are some Greek grilled meat recipes suitable for Tsiknopempti.

Some hotels and virtually every taverna will put on special menus for Tsiknopempti. By far, the most common item will be some variation of souvlaki – meat on a stick. These will be available everywhere along the streets in the taverna areas and walk carefully to avoid banging into an unexpected grill mostly obscured by smoke, sharing the already narrow streets and walkways.

Pronunciation: Tsik-no-pem-ptee, with the “p” softly sounded, nearly like a “b” or even a “v”.