Fancy brushing up on your tennis skills? Read all about the Annabel Croft Tennis Academy Summer schedule HERE. 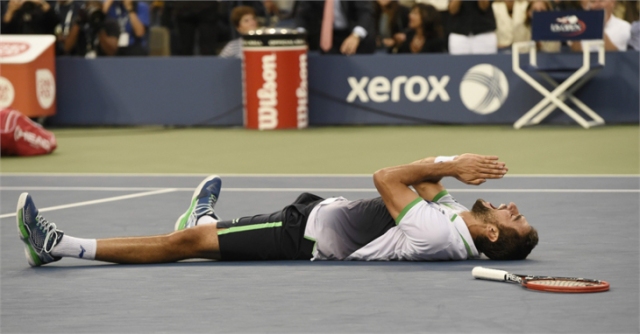 By Steve Keating at Cyprus Mail

Croatia’s Marin Cilic swept past Japan’s Kei Nishikori 6-3 6-3 6-3 to win the U.S. Open on Monday and reach the pinnacle of the sport one year after a doping ban kept him out of the year’s final grand slam.

The big-serving Croatian overwhelmed a weary Nishikori in one hour, 54 minutes to clinch a ruthless victory and deny his 10th-seeded opponent’s bid to become the first Asian man to win a grand slam.

With the win, 14th seed Cilic becomes the first Croatian to win one of the sport’s four grand slam championships since his coach Goran Ivanisevic celebrated a Wimbledon victory in 2001.

“This is all hard work in these last several years and especially this last year,” said Cilic. “My team has brought something special to me, especially Goran, we were working really hard but the most important thing he brought to me was enjoying tennis and always having fun.”

“I enjoyed my best tennis over here and played the best ever in my life.”

The final marked the first time since the 2005 Australian Open that at least one of tennis’s big three of Novak Djokovic, Rafa Nadal and Roger Federer was not playing for the title.

The two players walked onto the Arthur Ashe Stadium court under overcast skies and much more forgiving conditions than the sweltering heat they faced through much of the fortnight.

While both men were playing in their first grand slam final it was Nishikori who displayed more jitters as Cilic quickly found his range and unloaded on his helpless opponent by blasting 17 aces to Nishikori’s two.

Nishikori had his opportunities with nine break chances but could convert just one while Cilic was five of 11 and enjoyed a 38-19 edge in winners.

“It’s a really tough loss but I’m really happy coming to my first final,” said Nishikori, who appeared to run out of gas after beating three consecutive top-10 opponents and having to endure a pair of five-setters. “Sorry I couldn’t get a trophy today but for sure next time.

“It was a really fun two weeks here. I hope I can be coming back next year.”

Cilic had Nishikori on the back foot from start to finish, speeding through the opening set in 33 minutes.

The 14th seed, using his huge wingspan to reach out and bash forehands across court and a booming serve to score easy points, again had an early break in the second and added another to go up 5-2.

Nishikori mustered a fightback to score his only break of the match and close to 5-3 but the relentless Cilic broke right back for a 2-0 lead killing any momentum his reeling opponent was building.

With a maiden grand slam within sight, Cilic kept his foot on the gas and grabbed an early break in the third.

The only nerves Cilic would show came when he double faulted on his first match point.

But it was only a momentary lapse as he buckled down and finished off a reeling Nishikori with a backhard winner before letting out a mighty scream as he fell onto his back and raised his arms in celebration.

“You never know when the nerves are going to kick in,” said Cilic, who returned to competition last October after a four-month ban for what he always maintained was the result of ingesting a banned substance through a tainted supplement.

“I think both of us were pretty nervous in the first set especially.

“Everything I was working for and dreaming came today and I feel for all the other players that are working hard, I think this is a big sign, a big hope that if you are working hard things are going to pay off.”