A whole week of music 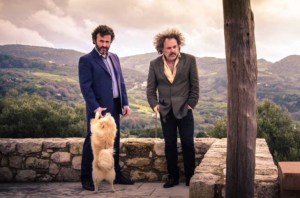 Details of the Festival at the end of the Week:

This week sees the musical highlight of the summer months, an event which – over the past three years – has drawn crowds from all over the island and beyond. Now in its fourth year, Fengaros Music Festival is back with a bang, truly establishing itself as one of the most important happenings at the hottest time of the year. A mixture of musical acts and – for the first time – a series of workshops, the festival is now bigger and better than ever. Organised by Louvana Records and sponsored by the Ministry of Culture and Education, the

Cyprus Youth Organisation, Kato Dhrys Municipal Council and the Kato Dhrys Youth Centre, this is an event at the forefront of the island’s music scene.

Moving this year to a new venue, the village of Kato Dhrys in the Larnaca District, the festival will host more than 25 acts in the village square, the streets and the local school. “The participation of notable local and international acts will compile a rich and diverse line up, which, combined, with the natural beauty of the space, creates a unique cultural proposal,” say the organisers. With its paved lanes and traditional architecture, welcoming inhabitants and quiet calm, Kato Dhrys is one of the loveliest villages of the area. At the pleasantly cool height of 520 metres above sea level, this long-established community is almost equidistant from the three main towns of Nicosia, Limassol and Larnaca – thus ideal in terms of location.

Beauty and accessibility: the perfect venue to showcase the talents of the festival’s many performers. Travelling from Thessaloniki, rembetiko group Pliri Ndaksi will be joined by fellow countrymen Manneken Pis, while both Two Camels and the River and the folky Ylva Ceder will be flying in from Sweden especially for the event. Most noticeable in this year’s line up are the acts of Fivos Delivorias, Xylouris White and Chimerinoi Kolimvites, and there’s also a huge roster of local bands such as The Low Spark, The Zilla Project, Pavlina Konstantopoulou and Pavlos Michaelides, Fuzz Bus with Vasiliki Anastasiou, Delirium Elephants and the beloved project Paramythies among others.

But what makes this year’s festival even more special is the organisation of Fengaros Music Village in the week leading up to the actual event. Starting today, nine workshops will turn the village into a festive music school and set the scene for the festivities to come. Organised in collaboration with Music Village in Greece – now in its ninth year as an internationally acclaimed musical gathering – this series is an attempt to create a new approach to artistic learning.

With instructors from Cyprus, Greece and England, the workshops will be run on a daily basis and divided into two sessions: morning and afternoon. “The themed sections of each workshop will function integrally and will intend to approach musical art broadly, yet effectively, whilst putting particular emphasis on original and unconventional areas that have not yet been integrated into the Cypriot educational system,” say the organisers.

Also promising “pre-scheduled and spontaneous performances of musical ideas and the productive exchange of ideas and projects among artists of diverse nationalities,” the Music Village certainly looks like being a week of inspiration and learning all round. There’s renowned lute player Giorgos Xylouris’ class on an Introduction to Cretan Music; a ‘Drumming and Beyond’ session by Dave De Rose; a workshop on both the techniques and concepts of Carnatic music – run by Andy Skourdis; and a course on Improvisational Freedom, run by Andreas Panteli, aimed at improvisers of all levels, instruments and styles of music.

Emmanuel Vourakis – of blues band The Zilla Project fame – will be conducting a fascinating and instructive lab covering all the basic components that form a successful career for an electric guitar player; Athena Kasiou will be taking a look at how to approach theatrical scripts; Vasiliki Anastasiou will be running a vocal workshop focused on the songs of neighbouring countries; Kostas Makrygiannakis will be aiming to familiarise guitarists with the procedure of music-making; and Pavlos Michaelides will be holding a workshop revolving around the elements that contribute to traditional violin music.

However, even if you can’t afford the time to attend one of these new and spectacular masterclasses, don’t forget about the actual festival itself. At the end of this week of workshops, the Fengaros Music Festival will be three days of utter musical delight in one of the most picturesque locations. Well worth a visit.